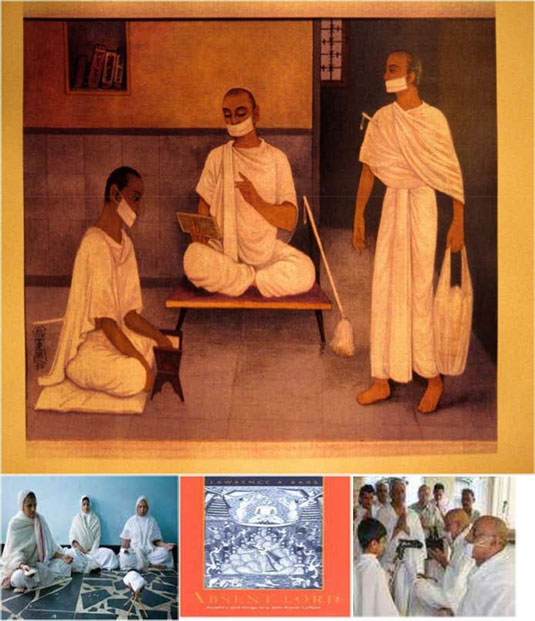 Evolution of Svetambara sects of Jainism:

It is necessary to develop a short narrative of the development of Svetambara sects from their original split from “Jinakalpa” established by Mahavira and his disciples. The progress of the Jainism continued with the addition of many new immigrants and clans after the demise of the last great patron King Samprati. As a result of this new infusion and geographical dispersal of the Jaina communities throughout India, various Jaina castes and Sanghas (religious order) emerged primarily centered in Northwest India.

There were many who accuse him that he was doing this to accommodate Muslim rulers who wanted idolatry abolished. This period is considered a very difficult period in Gujarat’s history when last Hindu kings of Gujarat, Vaghela dynasty had fallen, and a large number of communities had migrated from Rajasthan and North Gujarat to Saurashtra. A large number of temples were demolished by the iconoclast armies of the Delhi sultanates. At the age of twenty-five, he went to Ahmedabad and took employment with the Muslim sultan Begda due to his jewellery skill, while working simultaneously for the Svetambara sangha of Ahmedabad for his calligraphy skills, where he produced many religious teaching leaflets and duplicating texts. At that time, the State of Gujarat was ruled by Sultan Mohamed Begda, who declared Independence from Delhi Sultanate. Mohamed Begda was a Muslim ruler, converted “Taksak” Rajput and “iconoclast of first-order” and he was responsible for the destructions of many Hindu and Jain temples of Gujarat. He defeated the last Chudasama dynasty of Raja Mandlik at Junagadh and sacked the temple of Somnath like it was a “coveted Oscar” and enjoyed its loot and destruction.

After the death of Mohamed Shah Begda, he left his employment and took on the work for Jinasuri Acharya of Tapa Gachha (regional Sangha). No one knows the reason for his sudden departure from Begda’s service. One reason that was being given was he became the victim of the Palace purge that followed when new sultan, his Grandson Ahmed Shah took over the reign. The Ulemas who had lost their influence with his Grandfather Begda struck back against all perceived opponents and with a nod from new and inexperienced Ahmed shah removed all non-Muslim officers from the State’s administration. Yet another version of the story was that Lonka shah left the service of Ahmed Shah when he was overcome with pain and pity on seeing a resurgence of killing and temple destruction by Ahmed Shah. He assisted Acharya Jinasuri (Head of Jaina order) in copying scriptures and Jaina sutras because of his excellent calligraphy skills. He copied several scriptures and while doing so, he used to make one copy for himself. He thus got educated in Jaina cannons and scriptures. His Murtipujak (idol worshippers) opponents questioned his expertise and knowledge of scriptures and sutras. As records indicate, he was as knowledgeable as any learned and initiated monks. Lonka became highly educated in the Jain religion, Metaphysics and philosophy, in course of his time with Jinasuri. He also discovered that none of the Jain scripture ever sanctioned the idol-worshipping that is being practiced by temple-based Svetambara worshippers. He felt that religious teachers (Acharyas) are keeping this information away from laymen (Shravak and Shravika) to preserve their power and positions.

S. Stevenson observed: ” one effect of the Mahomedan conquest, however, was to drive many of the Jainas into closer union with their fellow idol worshippers in the face of iconoclasts, another opposite effect was to drive others away from idolatry altogether. No oriental could hear a fellow Oriental’s passionate outcry against idolatry without doubts as to the righteousness of the practice entering his mind.”

Ahmedabad was the new capital of Gujarat where the Sultan resided, and it was under the Mahomedan influence. This is where we can first trace the origin of these doubts and self-examination. Lonka sect arose first during 1452 AD, as the first non-idolatrous Jaina sect of India. That was further refined with the proper selection of canonical texts and monastic tradition by various followers for the next two hundred years and finally settled by assuming the name of the Sthanakvasi sect of Jaina around 1653 A. D., the dates coincidently coincided with the rise of reformist movements of Christianity like Lutheran and Puritan movements of Europe.

Pandit Dalsukh Malvania suggested in his 19th-century work on Sthanakvasi Jain that “Lonka Shah’s rejection of idol worshipping was articulated in part under the influence of Islam.” The author concurs with that observation. Although this may have been a pragmatic response to witnessing the destruction of Jaina shrines which Muslim iconoclasts were carrying out at an unprecedented scale. Malvania cites two original manuscripts held in Jain library at Ahmedabad to support his inference. The manuscript written by either Lonka or someone close to Lanka cites the rationales for his anti-idol stand based on violence inspired by the temple building activities and cites canonical texts dealing with Mahavira’s principles and monastic tradition. Lonka Shah’ selection and acceptance of only 32 out of 45 Svetambara canonical texts were based on image worshipping references. That he found in 13 out of 45 texts.

The Murtipujak have argued that the image worshipping references are also found in 32 texts that Lonka Shah admitted as acceptable. Finally, the compromised was reached and more texts were admitted on the ground that they were pre-Mahavira’s tradition.

Peter Fugal implied that the Sthanakvasi lacks scripture but that is not entirely true. Lanka picked a portion of Svetambara scripture and made them as part of Lonka Gachcha that rejected idol worshipping. Historically, there was no agreement on the singular authority of the literature as the knowledge was transmitted orally through generations. This was the primary bone of contention between Svetambara and Digambara. Mahavira’s Gospel was originally transmitted to his early disciples and the scriptures continue to evolve by his successors. Digambara never took any interest in the schism within Svetambara during Lonka’s time. However, Lonka did inspire some Digambara of the north and they started their movement that was called “Tera panth”.

As Lonka remained a lay preacher most of his life, but several of his disciples and followers became Munis and adopted the title of Rishis in the same manner as Vedic Rishi. Among them, Muni Bhanaji, Muni Bhikaji, Muni Nunaji, Muni Bhimaji, Muni Jagmalji and Muni Sarvaji almost all of them hailing from the Oshvala caste of Jains, suggesting that Oshvala provided a strong base of support to reformist Lonka. Interestingly over 90 percent of Oshvala Jains are small traders and the competition and taxes are very important issues for them. Lonka Gachha (Panthi) thus was born. Rishi Sarvaji was followed by Rishi Rupji from Anihilwara Patan in 1497 AD who also came from Oshvala caste. He admitted 200 families of Patan into Lonka Path that included a number of Shrimali castes. This conversion took place in 1511 AD. Soon under Rishi Rupji and his successor Jivaji Rishi, Lonka panth expanded into a number of branches: 1. Gujarat small and big branch of Lonka Panth (Ahmedabad and Baroda based) 2. Nagori Lonka Panth is based in Rajasthan. 3. Lahori Lonka Panth is based in Punjab.

With two master’s degrees in various Engineering fields and MBA. Worked for several years as Chief Financial Officers of a major company. As an entrepreneur, he owned several businesses. Presently, spends time researching on unresolved issues of history and connection with various cultures. Interested in new science and technology while traveling and visiting historical places with field trips.