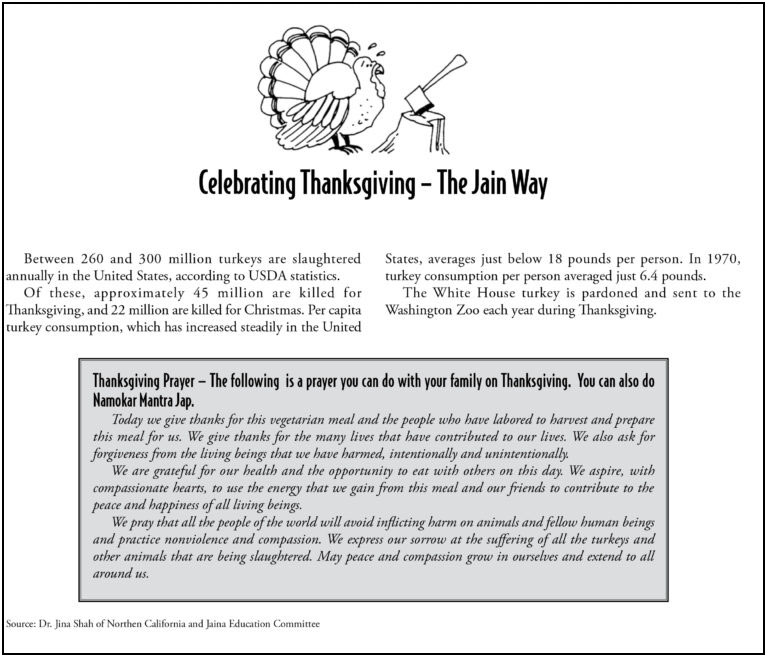 My Thanksgiving Break: The Jain Way

November, 2022 by Siddharth Kurwa
The bell rang on the loudspeaker, echoing through the empty halls of the school. Classroom doors opened and the seemingly quiet building suddenly erupted with the sounds of laughter and conversation with an obvious atmosphere of excitement. It was just like any other school day — besides the fact that we had nine days of vacation ahead of us. As I walked out to the parking lot, I thought about the week ahead of me. I looked forward to the opportunity to relax and recuperate from the stresses of senior year, catch up with procrastinated college applications, and hang out with friends and family.

Aside from gaining these conventional benefits of vacation from school, the most exciting thing ahead of me was the Jain Fellowship of Houston (JFH) youth lock-in. The youth coordinator, other officers, and I spent weeks preparing games, activities, and a schedule for the event as we awaited it in excited anticipation. When the date finally arrived and the sun began to set, we were ready, waiting to kick off the lock-in on the cold, November night. As each car pulled into the parking lot, the youth members got out and waved goodbyes to their parents.

The whole night, we played games of mafia, charades, and even some particularly interesting rounds of truth or dare. Losing track of time amidst the laughter and games, the hours flew by and it was breakfast time before we knew it. Yet the most memorable part of the lock-in was yet to begin. After satisfying our hungry stomachs and rinsing our mouths, we were joined by YJA Director of Events, Bonita Parikh, and a few other YJA board members and local representatives. As a group, we all sat down in a circle and began a navkar mantra jaap.

The clock ticked away and the ambience became calm with each person’s voice synchronizing with the others into a harmonious chord of soothing vibrations. As we repeated the navkar mantra over and over again, the unification of our voices made the peaceful meditation more and more compelling as it helped me realize the larger purpose of our objective. I’ve recited the navkar mantra every day of my life to the point that it has become a thing of habit.

Very rarely do I take the time to separate my mind from the rush of thoughts and focus on the meaning and enunciation of each syllable. Rather, my mind switches to auto-pilot and I speed through the mantra, thinking more about what I’ll do afterwards than the prayer itself. While we’ve been taught in pathshala to focus and meditate as we say our navkar mantras, the task is much more easily said than done. Our minds are formed without any restrictions or barriers, so controlling the free flow of thought is an exponentially difficult task.

However, the situation was completely different during our navkar mantra jaap. My mind seemed to naturally fall into focus and every time a distraction appeared into my thoughts, I became aware of the voices of those around me and felt motivated by those around me to re-focus myself. It was amazing that we were intrinsically keeping each other’s focus in check just by being in each other’s presence, ensuring that the navkar jaap was conducted purposefully. Finally, when the last “padmam havai mangalam” was said, our eyes opened and the serene aura hung momentarily before vanishing.

We had dropped back into reality, exiting the subconscious, deeper regions of our minds. The navkar jaap was conducted in remembrance and mourning for the immense magnitude of violence that was going to be committed that week. It was our way of praying for the more than 45 million turkeys that would lose their innocent lives for Thanksgiving. While our small navkar jaap did not have any tangible impacts, our purposeful intention gave it meaning. Although we had no control over the destinies of the turkeys, we repented and hoped for their souls’ goodwill. When I sat down later that day to watch the NY Giants vs Dallas Cowboys game, I stopped for a minute to think about the navkar jaap and couldn’t help but feel proud of its outcome.

Our navkar jaap, while small, was a trigger, a push, a nudge towards the spread of our non-violent ideology. It planted the seed of repentance in all of us by raising our awareness towards the issue. Although the traditional “turkey-day” will not leave the American culture, the everyday efforts that we, as a minority group of American Jains, make towards living non-violent Jain lives in the 21st century will have a profound impact eventually.

He works as a Senior Manufacturing Engineer at Tesla. San Francisco Bay Area.