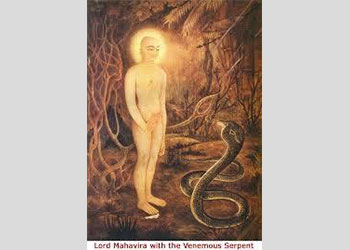 July, 2021 by Dr. Mona Badani
It has been sometime since I started learning about Jainism systematically via a University of Mumbai course.

I have learnt and understood that Historians have proof that Shraman Mahavir was a historical person.   The teachings that-  when we recite the Navkaar Mantra, we pray and aspire to get the 108 qualities of the Panch Parmesthi- these seem humanly possible when we know that Mahavir Swami was indeed a mortal human being. Indeed, every time I am ready to respond to someone with anger or hatred, I remember Mahavir Swami’s response to Chandkoshi. Before I learnt about Mahavir Swami, my argument to myself was “I got angry because she did such and such a thing”. But the Chandkoshi episode has taught me that as a HUMAN, it is possible to not retaliate, to not reciprocate hatred with hatred. It is humanly possible to react to venom with love.

I also learnt about the early years of Mahavir Swami’s  life. It has been mentioned in Jainism literature that Mahavir Swami was highly intelligent and by the time he reached his youth, he had mastered the four Vedas and a host of other subjects including History, Mathematics, Enclyopedias, Astronomy, so on and so forth. So even before he renounced the material world, he had knowledge of a large database of information. After tonsuring his head and renouncing his home, he became a monk and dedicated his life to severe penance, where he did a lot of meditation and rumination. In those years he must have thought over all the miseries that humans come across and he must have thought of all the solutions that are possible. He must have deeply analyzed all that plagues human beings, all the things that lead to miseries and the solutions of all such things. Intelligent as he was, he made mental lists of things… Lists which eventually became the very basis of a new religion- Jainism. These lists were unique, extensive, and complete. The more I think about the lists, the more faith I develop in the religion, that Mahavir Swami has done so much research and served everything on a platter for us, ready to use and make our life simple and trouble free. 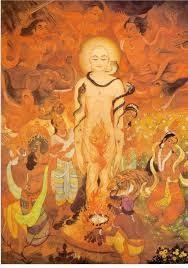 I am so amazed at all these lists that I cannot stop myself from mentioning a few here. The first is the list of the five basic vows: Ahimsa, Asteya, Achuaria, Aparigrah and Brahmacharya. In other words, truth, nonviolence, non stealing, non-promiscuity, and limiting one’s possessions. Though these principles are more or less the same as taught in all religions, the way they have been listed as the five basic vows tells us that he gave equal importance to each one of them and he had analyzed that these five are the basic pillars which maintain the sanctity of the social fabric of humanity. It is also said that before him Parshwanath Bhagwan had propagated a religion based on only four vows. It was Shraman Mahavir who introduced the fifth vow of celibacy. Here again, we have historical evidence that women were ill treated at the time of Shraman Mahavir and were treated more like a commodity. Polygamy and prostitution were rampant. He introduced this vow as the fifth vow to balance the social structure of society at that time. He could have put it as a subclause in any of the other tenets, but he chose to list it with the other four major vows as he had realized its importance. It was important for humans to remain faithful to their life partners. Sexual exploits outside of marriage almost always are harbingers of agony and suffering for all the people involved. We, who claim to be an advanced society which sanctions a lot of transgressions of the sanctity of wedlock, have witnessed the problems encountered by such exploits like extramarital and premarital affairs. By and large, it is the children of such affairs who bear the brunt of such sexual exploitations. The scars left behind after such affairs permanently haunt the parties involved and there is a lot of psychological traumas.

He was so good at making lists. He made a list of 18 things which he identified as PAAP. Let me first list the 18 Paapsthanak: Pranatipat : Causing violence, Mrishavad : Speaking falsehood, Adattadan : Stealing, Maithun : Engaging in sexual enjoyments, Parigrah : Having attachment for articles or wealth Krodh : Getting angry, Maan : Being arrogant, Maya : Being Deceptive, Lobh : Being Greedy, Rag : Showing attachment, Dvesh : Showing hatred and grudge, Kalah : Quarrelling, Abhvakhyan : Making false accusations,  Paishunya : Carrying tales against others,gossip,  Rati-arati : Being pleased or displeased with trifles, Par-parivad : Calumniating others, Maya-Mrishavad: Speaking falsehood with cunningness, Mithya Darshan Shalya : Believing in false doctrines,not having  faith in Guru, enlightened souls (arihant) and the path shown by them. When I try to imagine of all the different troubled situations I got into or situations which led to either grief or anxiety, I find that the cause was included in these 18 causes. He must have dived deep into daily interactions of human beings with one another and must have identified the reasons which are trouble inviters. To imagine he even included gossip in this list!!!!

He was so good at making lists. There are 7 things identified as vices (vyasana) : gambling, drinking alcohol, meat-eating, whoring, hunting, thieving, and adultery. Each of these begins as a hobby, and gradually may lead to addiction where they consume the morality and humanity of the victim. This list is again a complete list, and there can be nothing more dangerous that these seven for a human being to invite his downfall and eventual extinction . (On a lighter note, if he belonged to the current era, he might have included gaming on the computer as the eight!!)

Not only was he good at making lists, but he also excelled in making a chronology of the lists he prepared. So, he made lists of the type of penances that a layperson can perform. 6 bahyantar, 6 abhyantar. Again, he listed the Bahyantar first, because for the beginner, it is easier to develop a control on his psyche with external penances and once he trains his mind, he then can tread further on the path of internal penances like meditation, repentance, and resolve.

Not only was he good at making lists, but he also excelled in making a chronology of the lists he prepared. There is a list of stages of spiritual achievements of the Mokshmargi . This list is called Gunasthaan. The chronology is so well arranged that one stops the inflow of Karmas, one cause at a time, beginning with the easiest first to the more difficult ones later. Beginning with establishing faith, it goes on to establishing discipline by following all vows(VRAT), then shedding all laziness and treading on the path of liberation, head on; next follow the passions, which are more difficult to shed and lastly the activity of mind body and speech.

The more I read about the religion, the more I am amazed about the intelligence that has gone into making the tenets of this religion. It has been called a negative religion by some, but I strongly believe that it was a path which reveals the secrets of internal happiness and peace. It never has any compulsions; you can choose the path you want to follow; you can remain a householder or you can become an ascetic. If you became an ascetic, you could choose whether you want to abandon all your possessions or give them up one by one. Thus, the renouncing is not in a way where material things are snatched away from the Mokshmargi. Rather it is like a person who  grows up, matures, and eventually does not care about the toys which meant the world to him as a child. Spiritual growth automatically makes  the material possessions insignificant!!

A student of Jainology, currently pursuing her Diploma. Radiologist by profession; a Fetal Medicine Specialist, having her own clinic in Kandivali, Mumbai. She is an avid reader, Visharad Bharat Natyam dancer, stage compere, active member of NGO and has performed in commercial Gujarati theatre, she wants to “Touch lives”.