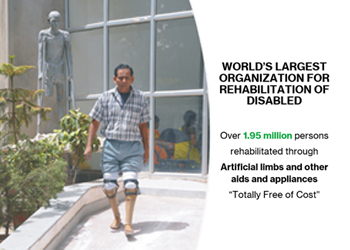 Applied Jainism – is a social platform to collaborate & discuss contemporary issues on sustainable co-existence (Parasparopagraho Jīvānām / परस्परोपग्रहो जीवानाम् where the principle of Jain philosophy & spirituality can guide us and become the torch bearer in the modern age. www.appliedjainism.in

Bhagwan Mahaveer Viklang Sahayata Samiti (BMVSS) is a Jaipur based premier nonprofit organization known around the world for fitment of artificial limbs, calipers, crutches, ambulatory aids like wheelchairs etc. totally free of cost to unfortunate souls who may have lost one or more limb. The organization’s activity is better known as “Jaipur foot” providers. Their product ‘Stanford-Jaipur Knee’ has been hailed by the world-famous TIME Magazine (issue of 23rd Nov 2009) as one of the 50-Best Inventions in the world of the year 2009.

BMVSS provides service free of cost with the clear intent to help the disabled regain mobility and dignity, without any discrimination- cutting across geographical, social, religious and gender bias.

Established in 1995, it has helped 1.95 million handicapped people in the last 46 years. It has 26 branches all over India and has held 82 free camps in Latin America, Africa, and many Asian countries. It does all this solely through the donation it receives as they never accept any payment from their patients who receive world class treatment, food and shelter during their stay and even financial assistance to get back to their home if needed. They have helped seven times as many handicapped persons as even the International Red Cross society! This initiative of creating a Special Alternative Affordable Healthcare Model for the poor has been published as a case-study by leading Business journals, including, Harvard Business School, USA, IIM Bangalore, and many more.

The force behind the operation of BMVSS is its founder Shir D. R. Mehtaji – a soft speaking, tall and resolute former chairman of the Securities and Exchange Board of India (SEBI). He is a recipient of Padma Bhushan Award from the President of India and many more national and international awards. What inspired him to undertake such a noble and herculean task? Where does he get the strength to persevere for almost 5 decades? How does he finance such a far-flung humanitarian cause? What are the secrets of his success? This article is based on the talk he gave on his philosophy at the APPLIED JAINISM Webinar on October 3.   It is a window in the psyche of a devout Jain.

D. R. Mehtaji’s simple answer to all the questions asked about his life’s mission is “Mahaveer’s teachings”. He proudly mentions the greatest compliment he ever received was when one of his former patients introduced him to his uncle (patient’s uncle) by identifying Mehtaji as one of the Mahaveer’s person. He is also inspired by Mahatma Gandhi’s favorite hymn – Vaishnav Jan to tene re Kahiya je pid parayi Jane re (A noble man is the one who knows what ails the other person). Albert Schweitzer echoed the same sentiments when he wrote “I want to join the fraternity of those who bear the mark of pain.”

As to following the teachings of Mahaveer, he quotes the first line from Tatvarth Sutra – Samyagdarshanjnaäncharitrani Mokshmärgah (Right perception, right knowledge and right conduct constitute the path of liberation.) Right Action to him means understanding the the teachings from Shrutkrutang Sutra: “One must always be ready to assist helpless or a sick person” and “Those who think of other persons happiness attains it for themselves too”.

D. R. Mehtaji tells us that we must not only accept the teachings of Mahavir but also put it into action. All the rituals, penance and studying of scriptures etc. are no substitute for indulging in providing service to the needy. Again, he points to Bhagwan’s talking to his first disciple Gautamswami “There is no reward for servicing me but when you nurse a sick, helpless or elderly, you are indeed servicing me”. He also brings up the declaration we make during Pratikraman – “…. I have no enemies – everyone is my friend”. Being a friend means being helpful in time of difficulties for that person. So being useful to others should be the core nature not a sometime activity.

When asked about the fee less nature of the services his organization provides, he is quick to assert that it can only be so. Charging for the humanitarian assistance will make it a business not “seva”. He is very concerned about the rising cost of health care everywhere. To him, health care should not be reserved for the rich but a right of all. Since the expenses of his services are covered by the donations from generous and trusting people, he makes sure that the donor’s trust is not lost. Many reputable non-profit NGO’s report their administrative costs (fund raising, salaries and operational costs) as high as 50% whereas BMVSS with its laser focus on ensuring minimum administrative expenses has been able to reduce it already low cost of 4% in 2002 to just 2.76% in 2020.

Mehtaji discusses many of their national and overseas camp in what are considered dangerous or conflict zones. He found that when your mission is truly humanitarian, there is no reason to fear. Working in Naxalite areas, the Naxalite leaders approached them to inquire if they were comfortable. When a shopkeeper in Pakistan asked who Mahaveer was, Mehtaji’s answer did not include terms like Tirthankara or Jain Dharma but “Mahaveer is the Lord of Compassion”.

On environmental issues, he is uncomfortable with the present foundation of environmental activism that is based on fear. Fear of the looming catastrophe.  D R Mehtaji again leans on the teachings of Mahaveer. He calls Mahaveer the original environmentalist. Nearly 2600 years ago when Bhagwan was amongst us, there were no alarms about the air or water pollution. There were no factories emitting dangerous gasses. Still, Mahaveer’s message embedded in six chapters of Acharang Sutra evolves around the care we must exercise dealing with air, water, plants etc. because his teachings were built on Moral foundation of compassion for all living beings and not on the fear of the future. Every one of us can be environmentalist by committing to be frugal in use of water or preserving trees and plant life.

We must enroll the younger generation in the service of environment and there by strengthen roots of Jain Dharma.

JAINA India Foundation presents Zoom webinars featuring prominent leaders on APPLIED JAINISM on the first Sundays of every month at 7:30 pm IST. Our next webinar will be on November 7 and Dr. Sushma Singhvi will speak about Environment and Economics.

Sangeetha is a Chartered Accountant and Chartered Financial Analyst. She is a trustee of Jain Academy Educational Research Centre and under the guidance of Dr. Bipin Doshi, she founded Applied Jainism in October 2020, a social platform to collaborate and discuss contemporary issues on sustainable co-existence where the principle of Jain philosophy can guide us.