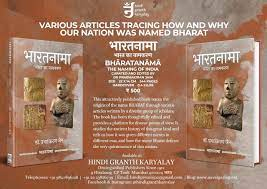 A country’s name evolves throughout time, based on its geographical and geopolitical circumstances. A name given to a nation during a certain era reflects, albeit not completely, the country’s geographical characteristics. As a result, the name of our subcontinent, which is now known as India (the undivided India encompassing Pakistan and Bangladesh), has evolved throughout time as the geographical situation has altered. Bhārata (India) is a confederation of states with a fusion of many cultures, traditions, and history, making it a fascinating country that embraces the variety of the globe. There are certain historical facts that interest us and explain how Bhārata came into being, as well as what is the antiquity of this nomenclature. Numerous literary and epigraphical sources from the early and middle ages refer to this subcontinent or a large portion of it by various names i.e., Jambūdvīpa and, Bhāratavarṣa in broader Indian literature, and Kumārīdvīpa specifically in Sanskrit Brahmanical literature other than Buddhist books. (Mukherjee)

However, India which has always been the Guru of Knowledge, is still looking for the origins of its name. Even now, the truth of why and how our nation came to be known as India is overlooked. “I used to accept the foundation of naming India from Dushyant’s son Bharat, but it was my error,” stated the renowned historian Dr. Vasudev Sharan Aggarwal (Preface 3). They rectified their wrong belief; however, the mistake was not corrected by those who authored the historical textbooks. Why is it so difficult to embrace generally recognized truth that is supported by Vedic, mythical, archaeological, and historical evidence? Why is it that the whole world, including the young, is kept in denial? The fact is that our nation was called Bhārata after Cakravartī Bharata. Bharata was the eldest son of Ṛishabdeva (the 1st tīrthaṅkara of Jains) of the Ikṣvāku dynasty (Jain 5) (Shah 15).

Another interesting fact connected with the Indian ethos is the culture of non-violence which is resonated in Indian temperament at large. India was named Bhāratavarṣa after the world’s sole non-violent war between Ayodhyā king Rishabhdev’s son Cakravartī Bharata and his younger brother Bāhubalī. This war defines the perpetual sentiments of non-violent behaviour in Indian way of life.

The book “Bhāratanāmā” is a well written book elucidating this very fact why our nation is named Bhārata and what are its origins. The book published by Bharatiya Jnanpith, edited by Dr. Prabhakiran Jain, along with compilers Shailendra Jain, Chandramohan Shaha and Sanyam Jain includes 35 evidence-based essays on this topic and other noteworthy material from renowned archaeologists, authors, historians, litterateurs, and religious gurus. The book articles are written in multiple languages i.e., Hindi, Gujarati, Marathi, Kannada, Tamil and English. The language of the articles in the book is simple and lucid.

The book archeologically and logically reiterates the fact that Duṣyanta’s son Bharata was like hundreds of ordinary monarchs. He was not such a great monarch that he deserved to have a nation named after him. Our country’s name, “Bhārata,” is derived from Ṛishabdeva’s son, Cakravartī Bharata. The book supports, its claim through various scholarly research done by archaeologists and prominent academicians.

According to M.C. Joshi, former Director General of the Archaeological Survey of India and one of the contributors to this book, the inscription in Udaygiri and Khaṇḍagiri caves in Odisha mentions ‘Bharadavassa’ and agreed that the nation got its name after Cakravartī Bharata, the son of Ādinātha Ṛishabdeva.

The book provides great insights on our cultural roots and heritage. This book is a must read, because even well-educated Indians have little understanding of why our nation is named as Bhārata. Former Hon’ble Prime Minister Shri Atal Bihari Vajpayee expressed surprise at the majority of our people’s ignorance on this issue and requested that someone should conduct a thorough investigation into the origin of the name Bhāratavarṣa in order to educate the general public. This book will severe the larger purpose of breaking the myths and will give us true understanding about the origin of our country’s name.

Almost all the articles of the book Bhāratanāmā are admittedly written with the inquisitive tone clubbed with the archaeological findings. At some point readers can feel that most of the articles on naming India are written with concrete evidence and historical references. Surely this book is a worthwhile attempt to take the public beyond the illusions towards the authentic truth with an open thinking. Along with naming Bhāratavarṣa, the book will pave the way for thinking on other subjects as well, there is no doubt about it.

Malay Patel is currently serving as Joint Director at ISJS, Pune. He holds a doctorate degree in business studies from Sardar Patel University, Gujarat. Presently, he is pursuing his second PhD from University of Warsaw, Poland.