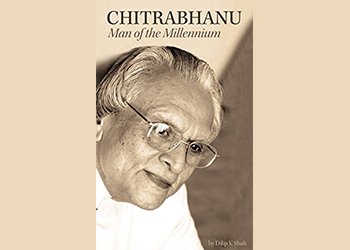 CHITRABHANU – Man of the Millennium by Dilip Shah

What sets Gurudev Shree Chitrabhanu apart from many gurus in the West is that he sees the guru as but a means to find one’s inner guru. “He is like an ice cube in a cooling drink. He cools your consciousness and then disappears,” Chitrabhanu writes. One’s devotion belongs to oneself, not to any teacher. Gurus–the word means “dispeller of ignorance and bringer of light”–can be anyone, regardless of race or sex, who helps one dispel the darkness and ignorance of his life.

In this comprehensive and inspiring book of Gurudev Shree Chitrabhanuji’s life, Dilip Shah captures the very essence of the man who has touched the lives of countless Jains and non-Jains in India, America and around the world. The book traces his life in India (to which Dilip is much indebted to Clare Rosenfeld’s first biography in English) to the second half of his life in America and throughout the world. From the opening tributes by Acharya Chandanaji and two of Dilipbhai’s mentors, Drs.Diraj Shah and Sulekh Jain, past presidents of JAINA, to the closing remarks by Pramodaji and family members, it is clear that we are blessed to have Chitrabhanuji in our midst. As one early American student of Gurudev said,” He was virtually ego-less, caring and very gentle. When he spoke, it was pure poetry. He taught us specially to learn to ‘catch the ego’. He would say,’Your ego can be a good servant, but always will be a poor master’ ”.

Gurudev, now 95, continues to promote Mahavir’s message of Ahimsa and to live as much as possible a life of nonviolence. He attributes his long life to his daily practice of meditation, 3-4 hours of silence, and a vegan diet. Looking back over his life, he said, in a Forbes interview in 2015: “…essentially I have not changed. I am still living a life of simplicity and living in harmony with one’s nature, which was at the core of my life as a monk 40 years ago.” As a monk in India, he spoke to crowds of up to 200,000; since being in America he has inspired and supported the growth of 70 Jain centers in the US and Canada. He is a beloved spiritual leader of Jains in America, the UK, Netherlands, France, Switzerland, Kenya, Singapore, Dubai, Muscat, Malaysia. How has he accomplished all of this?

Gurudev’s life has been marked by successive courageous transformations. As a young boy Rupragendra (“Rup”), he showed courage when some bullies were harassing a girl student. Without hesitation he stopped the bullies, even though they were much bigger than he and called him a coward. He was equally courageous when it came to dealing with some of his own inner enemies: an outburst of anger, another of greed, and giving up a bad habit of smoking. From a young age, he grappled with the deaths of his mother, his sister, and his dear college friend Usha, asking, “Why do my loved ones leave me?” It was his search for the answer to such questions, about the meaning of life, that led him to become a monk: Muni Chandraprabh Sagar.

As a monk Chandraprabh showed courage again, taking unorthodox steps: giving talks in the evening, speaking to the Harijans (Untouchables), saving women in a house fire, encouraging the Swetamber, Digambar and Sthanakwasi sects to celebrate religious holidays together. Wanting to transcend strict Jain sectarianism, he began writing with a pen name, Chitrabhanu, in the local papers, to the larger Jain audience. A major transformation came when Chitrabhanu decided to break the Jain monk vow of no travel except by foot. He said, “Wherever the need for Mahavir’s message exists, a Jain Sadhu must travel—that is his duty”. Many disagreed, and when he flew to the 2nd Spiritual Summit Conference in Geneva, 10 busloads of people with stones went to the airport to try to stop him. After the conference, he decided to leave the monkhood, marry Pramoda, and go to America to share Jain teachings with the West.

Throughout his life Chitrabhanuji has been an open minded and independent thinker, so it is no surprise that in the 1990s, in his 70s, he and Pramodaji, on learning of the vegan movement and the extreme cruelty to animals on factory farms, without hesitation began to advocate for the elimination of milk and ghee in the Jain diet and in Jain temples. He inspired the Lighthouse Center, Inc. an interfaith center for spiritual growth in Michigan, where he and Pramodaji are spiritual advisors, to become a vegan center. As Gary Francine, a friend of Gurudev’s and a legal scholar well known for his work on animal rights theory, writes: “The Jains expressed it well long ago: ‘All beings are fond of life, like pleasure, hate pain, shun destruction. To all life is dear.’ “Gurudev trusts that in time all Jains will come to agree that being Jain is being vegan.

We all owe a debt of gratitude to Dilipbhai for giving us this remarkable story of Chitrabhanuji’s life and mission as Mahavir’s messenger of Ahimsa.

CHITRABHANU – Man of the Millennium is available only on Amazon.com

Dr. Nirmala Hanke is President of the Lighthouse Center, Inc. in Whitmore Lake, MI. The Lighthouse Center is interfaith, open to all spiritual pathways, founded by Chetana Catherine Florida in 1979, and under the guidance of Gurudev Shree Chitrabhanuji. The center embraces the Jain Philosophy of Ahimsa and promotes a vegan lifestyle. Nirmala is a practicing psychiatrist, focusing on meditative psychotherapy and Reiki healing.