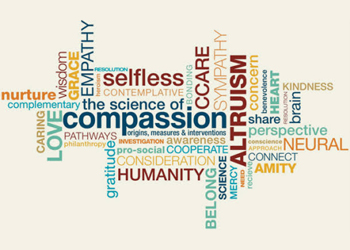 February, 2021 by Dr. Mona Badani
The oxford dictionary meaning of karuna (compassion) is “a strong feeling of sympathy for people who are suffering and a desire to help them”. The last clause takes this emotion a notch superior to sympathy in that not only the emotion is invoked, but what is also invoked is proactiveness. Thus, though it starts with a feeling, it ends with an action. According to some thinkers, it differs from pity in that there is no “me” (ego) in the act of helping the one in distress. 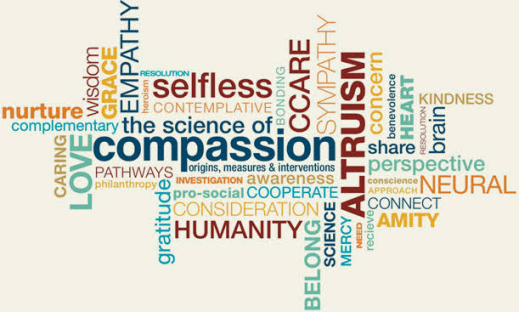 A human being is capable of being compassionate in two different ways; an act of omission: not being rude or bossy to the people on whom he/she has power or control. For example, when you employ someone, the very fact that you are paying, them puts you in a position to dictate terms. However, it is humanly possible to be disciplined and yet compassionate, to accommodate the employees’ situation with the workplace demands and chalk out a path that works for all. The same would hold true for a parent-child relationship or for that matter any relationship where one person holds more power than the other. The other is an act of commission wherein a human being is touched by the plight of another soul and decides to actively help, either in cash or kind.

The world over, there is a general consensus that as human beings we have an edge over the rest of the life forms on this planet- We have a capacity to think.This has been universally accepted by scientists, philosophers, religion masters, and metaphysics experts. Because of this capacity, we are unique because of faculties such as language, foresight, mind-reading, intelligence, culture, and morality. What makes us human is that we can think about alternative futures and make deliberate choices accordingly and take moral responsibility.

Although we still have the same biological needs of food, sleep, and sex, we need to make sure to fulfill them regularly to stay alive, it is not our instinct that drives us to satisfy these needs. We make conscious decisions about what we eat and when or how much. It is this capacity that enables us to invoke emotions such as compassion and sets us apart from the rest of the living kingdom. It makes us human!!

It is a panhuman feeling which transcends all barriers of caste, creed, gender, and religion. There is no dearth of examples and stories of compassion exhibited by intelligent animals, like pet dogs.

It is an emotion which not only alleviates the suffering of the receiver, but also makes a difference in the inner self of the doer. Inadvertently, while helping the one who is suffering, there arises a certain peace inside the being of the person who extends the helping hand. 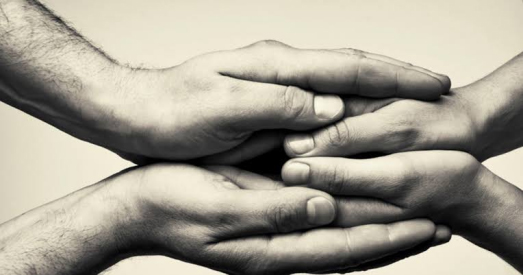 A man spoke with God about heaven and hell. God said to the man, “Come, I will show you hell.” They entered a room where a group of people sat around a huge pot of stew. Everyone was famished, desperate, and starving. Each held a spoon that reached the pot, but each spoon had a handle so much longer than their own arm that it could not be used to get the stew into their own mouths. The suffering was terrible.

“Come, now I will show you heaven,”  God said after a while. They entered another room, identical to the first — the pot of stew, the group of people, the same long-handled spoons. But there everyone was happy and well-nourished. “I don’t understand,” said the man. “Why are they happy here when they were miserable in the other room and everything was the same?” The God smiled, “Ah, it is simple,” he said. “Here they have learned to feed each other.” Feeding each other here represents the human quality of compassion. When one human being understands and comprehends another lives’ needs, discomforts and feeds/helps him selflessly that is what makes the earth a better place to live in. If each one takes care of at least one, there will be no suffering and we would be able to bring heaven on earth. Let us all come together and make the world a better place to live in.

Compassion is a natural emotion. However, it is influenced by the childhood influence,  most people follow their parents and grandparents as role models. A lot of people feel that humans per se are compassionate. It is an inherent feeling of all humans irrespective of age, caste, socioeconomic status. Some children, especially Jains, do go to paathshalla. A few of them recollect the experience as a rote learning of the stotras. They feel they did not get much out the experience and did it just because of parental pressure. Teaching then has to evolve. We have to move away from rituals and teach the core essence of the religion to the current generation in a language they understand. Jain religion is a wonderful religion with complete concepts and self- sustaining structure, with a lot of emphasis given on training the self. It is a religion that promotes peace among the self as well the world (through the doctrine of ahimsa). It factors in others’ point of view (through Anekantvaad). It is a religion of high virtues and is worthy of propagation rather than die a slow death because it is a difficult religion to follow. Let us do away from putting unnecessary pressure on rituals and rote learning and concentrate on promoting the true essence of this wonderful religion.

Clearly, when it comes to human nature and emotions, there are no rules. I am of the opinion that the human mind is a big machine that is entirely governed by the owner and one can choose to steer it towards the emotions one wants to.

Different people have different ways of expressing emotions. Most people are comfortable offering food to the hungry. Some extend a helping monetary hand; some give their time. Some show their compassion towards plants, yet others to animals. There are very few who feel that donations are a good way to show their compassion.  Professionals, people with human clients find it easier to help human beings and express their compassion. I have come across some people who say they give an ear to listen to the ordeals of the sufferer. A few years ago, this would not have been necessary. Now with the explosion of social media and technology, people have fewer friends and relatives with whom they can talk and discuss their situation. Lending a listening ear, then definitely does count when one is being compassionate. One person I know, says that she sends out prayers for those in difficulties. I feel that is awesome too. It is said that prayers have the power to heal and they reach the corners where medicines do not. There are definitely forces in this universe which humans have not yet deciphered and one of them I believe is the force of prayer.

It has been some time since I have been reading about religious practices and beliefs the world over. After reading a few things, I have come to realize one thing- all faiths and beliefs preach more or less the same path- the path which promotes truth, nonviolence, no stealing, limiting your acquisitions to your need, and chaste living. There are many beliefs about the existence of God, some believe that God created the world and is responsible for all that happens to you. Others believe that there is no God and only one is responsible for whatever happens to oneself. Then there are believers of rebirth and karma, whilst others negate this belief. For some, the rewards and punishments of their present actions is heaven and hell. A lot of people believe in the ultimate destination of moksha, salvation, liberation. Depending on their beliefs, they practice “Good” things to achieve their ultimate goal. I for one believe that whatever may happen eventually, the above principles definitely make your present life more peaceful and happier. My interpretation of liberation is to be liberated of anxieties, liberated of unhappiness, being freed from negative virtues like greed, ego, hate, deceit, anger.  There have been situations where speaking the truth landed me in short term trouble, but my experiments with truth have proved that in the long term it definitely streamlines matters. None of the faiths promote stealing, or violence or deceit; that means that there must be something in the “negative” paths that lead to loss of peace, loss of happiness.

What does one get in return for compassion? According to Jain cannons, compassion is selfless, and no reward is expected. It is NIRJARA. The karmic particles are being shed during the act of compassion. However, some do feel that there is something to be gained by the act. Some feel that it “FEELS GOOD” and because of this feeling, you get an incentive to do it again. Some feel that there is “SATISFACTION”. As a student of science, who also wants to believe in the JAINA SCRIPTURES, I feel that the things that have been associated with shedding of the karmic principles are all also associated with the release of ‘FEEL GOD” hormones released by the brain. Doing the acts associated with the shedding of karmic particles, releases these feel-good hormones and one feels happy. Moksh or salvation has been defined as a state of eternal bliss. Smaller morsels of these moments of happiness ultimately lead to the state of eternal bliss.

Different people have different spheres where they let out their emotion of compassion. Some are very compassionate for ekindriya jeev, water and vanaspatikay jeevs in particular; some are more compassionate towards plants; some were drawn towards birds and animals; yet others towards immediate family and friends. Very few show compassions towards the unknowns and the destitutes. Can one draw the inference that the higher one is in one’s spiritual journey, the farther he/she can reach out, till one reaches the highest spiritual level where the entire universe is the subject of one’s compassion? I guess that is what the TIRTHANKAR is. The all knowing- the one with infinite knowledge, infinite perception, and infinite power- who had no boundaries when it came to touching lives with his compassion and this is what resulted in INFINITE BLISS.

A student of Jainology, currently pursuing her Diploma. Radiologist by profession; a Fetal Medicine Specialist, having her own clinic in Kandivali, Mumbai. She is an avid reader, Visharad Bharat Natyam dancer, stage compere, active member of NGO and has performed in commercial Gujrati theatre, she wants to “Touch lives”.

Very well written.if we all reach out to any living being who is suffering from anything this world would surely feel like heaven.

This is indeed a very enlightening article laid out with good examples of how one can follow or enact Compassion…..Being a Jain I agree that especially the new generation believes that it is a very tough religion to follow…..that changes the entire image of what Jainism as a whole is truly about. Teaching or propagating core values like u have in your article would be of a lot better way to introduce what Jainism truly is about. Thank you the very informative piece that you have written 🙏🙏