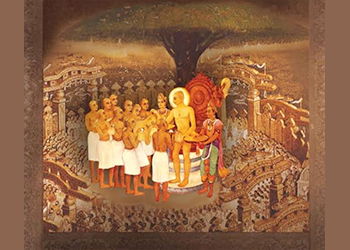 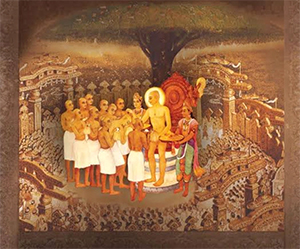 Gandharvād is a philosophical work in which there are profound discussions of eleven salient doctrines – compilation of answers given by Bhagwān Mahāvīra to the 11 scholars who later became his disciples.
When Indrabhuti Gautam and 10 other Brahmin scholars arrived in the Samavasaran to test the knowledge of Bhagwān Mahāvīra, they each had a question. These questions were of long standing in their minds, but they never verbalized them in front of anyone for the fear of becoming known as incomplete.
The names of the eleven Ganadhars and the questions they had were:

Mahāvīra respectfully welcomed them by their names answered their questions without being asked.
He answered them without insulting their Vedic beliefs. He told them that they had misinterpreted what was taught to them in Veda and went on to give the correct interpretation and satisfied their quest. The eleven scholars became Mahāvīra’s chief disciples and became known as Ganadhars.