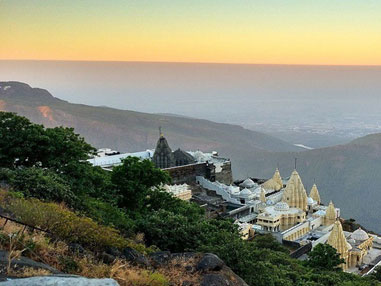 How to get there:

However, the recent attraction of this place is the Ropeway which Asia’s longest ropeway. The ropeway starts from Girnar mountain base. The ropeway will take passengers to an altitude of 900 metres, which is equivalent to 5,000 steps. Yatris who take advantage of the ropeway, must walk down 1200 steps to the Shree Neminathji’s Temple and climb back 1200 steps to access ropeway to bring them back to the ground level. However, most yatris prefer to perform their yatra by foot.

How many steps are there in Girnar Jain temple?

Situated on the first plateau of Mount Girnar at the height of about 3800 steps, at an altitude of 2370 ft above Junagadh, still some 600 ft below the first summit of Girnar, there are Jain temples with marvellous carvings in marble.

Girnar Hill is believed to be the Nirvana bhumi of 22nd Tirthankara Lord Neminatha. A temple that commemorates the Tirthankara was built in the 11th century.

The Jain temples, a cluster of mosaic-decorated domes interspersed with elaborate stupas, are about two-thirds of the way up. The largest and oldest is the 12th-century Temple of Neminath, dedicated to the 22nd Tirthankar: go through the first left-hand doorway after the first gate. Many temples are locked from around 11 am to 3 pm, but this one is open all day. The nearby triple Temple of Mallinath, dedicated to the ninth Tirthankar, was erected in 1177 by two brothers. During festivals, this temple is visited by several monks and spiritual heads.

The temples have carvings that are often compared to the engravings of Dilwara Temple near Mount Abu, Rajasthan. There are sixteen temples that look like a fort on a cliff. On entering, visitors will find the vast temple enclosure on the left while the Man Singh Temple on the right. The Neminath temple is the largest shrine here with an area of about 25000 square feet and has two halls and two porches.

The idol of Bhagwan Neminath is seen sitting in lotus position holding a conch shell in his hand. The shrine is surrounded by a passage that has religious images in white marble. There are two halls inside the temple complex. Each hall has a porch with pillars that have inscriptions that date back to 1275 to 1281. This enclosure is surrounded by 70 separate cells.

A little ahead of these is a room that leads to a cave with an idol made of white marble stone. To the south is an image of the first Tirthankara, Rishabha Dev. The Panchabai temple is located opposite to the room. To the West is the 15th-century Meravasi and to the North is the Parshwanath Temple. To the north of the temple complex is a tank, known as the Bhima Kund. Behind the Neminath temple is another shrine called the Vastupala-Tejpala temple. This shrine has an idol of Mallinath who was the 19th Tirthankara. To the South of the complex, near a beautiful spring is the Gaumukhi Shrine.

According to Jainism, the 22nd Tirthankara, Lord Neminath, renounced all the worldly pleasures when he heard the cries of caged animals destined for slaughter for food on his wedding day. With an intention to attain salvation, Neminathji went to Mount Girnar where he meditated and lived the life of a monk around 250 BCE. He is said to have attained Keval Gyan which is the supreme knowledge and Moksha which means release from the never-ending cycle of birth and death. His wife, Rajul, also became a nun by renouncing worldly pleasures.

The Shrine of Lord Neminath was built between 1128 and 1159. Mount Girnar is a sacred place for Hindus and Jains even before the Mohen-Jo-Daro period. The Vedas and other sacred texts have references of Mount Girnar in its holy scripts as Raivatgiri or Ujjayantagiri. The idol of Neminath is said to have been created by Indra who, according to the religion, is believed to belong to the fifth divine world. Some also believe that the idol of Lord Neminath was installed in Indra’s world later installed in Shri Krishna’s home temple. Followers consider the Jain Temples of Girnar highly sacred mainly due to its ability to universalise the religion through laws that bind all living beings by excluding national or ethnic scope.

The best time to visit is between November and February. The Bhavnath Mela over five days in the month of Magha (January–February) brings folk music and dancing and throngs of Nagas (Saivite holy men) to Bhavnath Mahadev Temple at Girnar Taleti. It marks the time when Shiva is believed to have danced his cosmic dance of destruction. The Girnar Parikrama festival is held in November.

This article has been complied with the help of following websites: