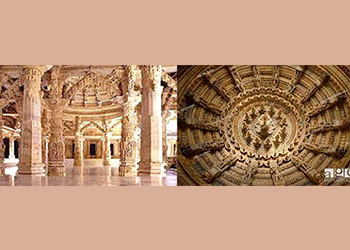 How Has Jainism Influenced Art and Architecture in India?

November, 2021 by Bessie Craig
Jainism is a trans theistic religion that prescribed non-violence towards all the living beings and has greatly influenced the development and art and architectural styles in India. This religion traces its root in the Indian subcontinent back in the 6th Century with its founder being Mahavira who was born in a royal family and later renounced his worldly life to become an ascetic.

Both modern and medieval Jains constructed numerous temples, particularly in western India, although there have not been too many in Corpus Christi. Some of the earliest Jain monuments were simply temples that were based on the monasteries for Jain monks and Brahmanical Hindu temple plan. For a long time, the artists in the ancient India were part of the many non-denominational guilds that were ready to offer their services to a Jain, Hindu or Buddhist. Most of the styles used during this period were more related to the place and time rather than the actual religion.

The Khandagiri and Udayagiri caves, located near the Bhubaneshwar city of India are some of the earliest architectural structures influenced by Jainism. These caves are partly manmade and somewhat natural and were initially carved out as residential blocks for the Jain monks during King Kharavela of Kalinga’s reign. These caves have inscriptions and sculptural friezes that depict women, elephants, and geese.

Built under Chalukya’s rule between the eleventh and thirteenth centuries, the Dilwara temples are composed of five well-constructed marble temples with each dedicated to a different Tirthankara. The Vimal Vasahi Temple is the largest temple among all five, was built in the year 1021 and is entirely dedicated to TIrthankara Rishabha. Some of its most breath-taking features include the rang manda ” a grand hall that is supported by twelve massive pillars and surmounted by an enormous central dome and the famous navchowki which is a collection of nine richly-carved rectangular ceilings. The pillars supporting the main hall are carved to look like women who are playing musical instruments and their 16 goddesses of knowledge each of which holds a symbol to represent their individual branch of learning.

The Jainism art and architecture has the sole objective of maintaining, preserving and glorifying the culture extensively. Jainas discovered that real artistic work is a representation of a religion’s true spirit. In addition to the religious value it has, Jainism has been a treasure to India and as a result, many Jain centers are now tourist attractions.
If you would like to learn more about architecture in India, please feel free to watch the following video: