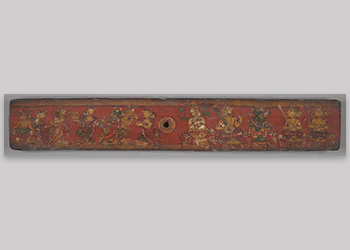 The growing prosperity of the Jain community in western India, engaged principally as merchants and bankers, allowed the commissioning of significant quantities of high-quality metal icons. As the custom of building large temple complexes became more widespread, so did the production of images and other objects associated with ritual and worship. One tradition that must be of great antiquity, but for which evidence survives only from around the tenth to eleventh century, is the production of palm-leaf manuscript editions of Jain scriptures, with painted illustrations on both the folios and the wooden cover (patli). The worship of the books of wisdom (jnanapuja) was a central activity in temple ritual. Even today the recitation and worship of the Kalpasutra manuscript forms an important part of the annual Paryushana festival celebrated by the Svetambara (“white-clad”) Jains during the monsoon season.

The kings of the Chaulukya (Solanki) dynasty, who ruled Gujarat and much of Rajasthan and Malwa from the tenth to the late thirteenth century, were energetic patrons of the Jain faith, building numerous temples and libraries in its honor. The twelfth-century king Kumarapala is recorded as commissioning and distributing hundreds of copies of the Kalpasutra to assist in propagating the virtues of Jainism, and was instrumental in the founding of twenty-one monastic libraries (bhandars) in Patan, his capital. In later centuries, the colophon evidence indicates a preponderance of lay middle-class patronage, principally by merchants and traders.

The oldest datable painted manuscript cover can only be securely assigned to the first half of the twelfth century on the basis of its association with a revered Jain guru of the Svetambara sect, Shri Jinadatta Suri, who is depicted in the narrative scene. This renowned teacher was elevated to the rank of acharya in 1112, and died in 1154, and this manuscript can thus reasonably be assigned to the period between these dates. It is preserved in the greatest depository of early Jain manuscripts, the monastic library at Jaisalmer, in the deserts of western Rajasthan. A set of book covers in the Museum’s collection is one of the earliest outside India (1984.496.33b) and may be accepted as broadly contemporary with the Shri Jinadatta Suri manuscript.

The earliest painted palm-leaf manuscript known to date is an edition of the Oghaniryukti, dated 1060 (Vikrama era 1117) and preserved in the Jaisalmer bhandar (Doshi 1985). This and other contemporary works already represent a stylistic phase beyond that seen in the manuscript covers just discussed. Dated evidence for the stylistic evolution of western Indian manuscript painting through the twelfth and thirteenth centuries is somewhat sporadic, and it is not until the later fourteenth century that we witness a maturation of this style, stimulated by a combination of internal and external forces (Guy 1995). Its significance for the development of later medieval Indian painting was to be profound.

The scene of King Siddhartha listening to the court astrologer interpreting his dream continues the depiction of dynamic dialogue and engagement seen in the twelfth-century book-cover paintings (1997.133). Masterful control of form-defining line and sensitive use of gesture animate this painting. The two figures are given further fidelity through the finely hatched beards and animated styling and patterning of the textiles. The use of the saturated red ground projects the figures into the foreground, a pictorial device already employed in the earlier book covers. The Lustration of the Infant Jina Mahavira (2005.35) typifies the apogee of this style. The red ground persists, as does the confident use of linear silhouetting of the figures. The radiance of the gods, so evident here in the image of Shakra enthroned on Mount Meru, is a means by which the artist invoked their divine nature. In this painting, the radiance of the immortals is suggested by the use of yellow, but comparison with a superb late eleventh-century copper alloy sculpture makes clear that it is a “golden image” that is intended (1992.124.1). The ability to radiate light has long been seen as an indicator of divinity in Indian religions.

One of the identifying features of fifteenth-century Jain painting is the increasingly lavish use of applied gold. A unique illustrated Kalpasutra manuscript from Jaunpur, Uttar Pradesh, dated ca. 1465, displays a restrained and highly effective use of gold and an intense blue sourced from lapis lazuli (1992.359). The use of both these colors had resulted from an awareness of Persian painting, which had become accessible through sultanate connections. The manuscript to which this folio belongs also introduces clear evidence that Jain patronage had extended by this time beyond Gujarat and Rajasthan into Central and Northern India. While retaining the broad conventions of the western Indian style, it displays a bold approach to color and rich ornamentation that connects the archaic western style with the emerging North Indian schools, which gained their fullest expression in the studio workshops of Delhi and surrounding regions. This legacy is seen in the court style of Malwa and other schools of the late fifteenth and sixteenth centuries.

The Jaunpur folio depicts the fourteen auspicious dreams of the Jina Mahavira’s mother, alluded to by the array of emblems above the bed chamber scene. The celebration of events in the lives of the jinas is a recurring theme in Jain art, seen not only in manuscript painting but also in the interiors of temples, most spectacularly in sculpted ceiling and pillar decoration. In the re-enactment of holy events in Jain temples, such as those accompanying the installation of icons and the celebration of the Paryushana festival, pictorial textiles are hung and illustrated sacred books are placed on reading stands, wrapped in rich fabrics. At these moments, the Jain temple becomes most properly the abode of Indra, the highest of the heavens in the Jain cosmology, where the jinas reside.

He was senior curator of Indian art at the Victoria and Albert Museum for 22 years prior to joining The Met in 2008. He is an elected fellow of the Society of Antiquaries of London and of the American Academy of Arts and Sciences and has served as an advisor to UNESCO. He has conducted extensive field research on Buddhist and Hindu South Asia, and participated in maritime excavations. He has curated numerous exhibitions, including Wonder of the Age: Master Painters of India (2011), Interwoven Globe (2013), Lost Kingdoms. Hindu Buddhist Sculpture of Early Southeast Asia (2014), The Lion Avatar in Indian Temple Drama (2016), Y. G. Srimati and the Indian Style (2017), and Crowns of the Vajra Masters: Ritual Art of Nepal (2018). He is Curator in the Department of Asian Art at the Metropolitan Museum of Art, New York. He was formerly Deputy Curator of the Indian and South-East Asian Department at the Victoria and Albert Museum, London, and Curator of the Indian Department at the National Gallery of Victoria, Melbourne.