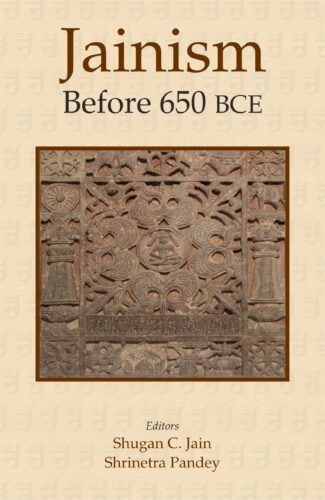 Jainism is one of the oldest living religions in the Indic civilization. It has rich spiritual, cultural and literary heritage to its credit. Generally, in the Indian tradition, there are two major streams which have discussed their affiliation with the society, namely Śramaṇa tradition and Vedic tradition. Among the living traditions, Buddhism and Jainism are Śramaṇic traditions. Being spiritualistic in nature, Śramaṇic tradition focuses on renunciation of worldly belongings and become free from the transmigration of the soul. Asceticism is the fundamental concept of Śramaṇic tradition.

The antiquity of Jainism goes back to the pre-historic period of Indian culture. According to Jain beliefs, the universe was never created, nor will it ever cease to exist. Time is divided into spokes of periods (kālacakra). An utsarpiṇī and an avsarpiṇī constitute one time cycle. Every utsarpiṇī and avsarpiṇī is divided into six unequal periods known as ārā. During the utsarpiṇī half cycle, the civilization develops from its worst to its best. During the avsarpiṇī half-cycle, these notions deteriorate from the best to the worst. Jains believe we are currently in the fifth ārā of the avsarpiṇī phase, after this avsarpiṇī phase, the utsarpiṇī phase will begin, continuing the infinite repetition of the kālacakra.

Jain tradition traces history of later part of the current ārā through twenty-four tīrthaṅkaras and reveres Ṛṣabhadeva as the first tīrthaṅkara. The traces found in the Indus Valley civilization are said to be a link to ancient Jain culture. As said above, there is a long tradition of Jain tīrthaṅkaras; among them, the last two tīrthaṅkara, the 23rd Tīrthaṅkara Pārśvanātha (9th Cent BCE) and the 24th Tīrthaṅkara Mahāvīra (6th Cent BCE) are considered historical figures. Tīrthaṅkara Mahāvīra was contemporary to Gautama Buddha. According to Antaḥkṛddaśāṅga-sūtra, the 22nd Tīrthaṅkara Neminātha was Śrī Kṛṣṇa’s first cousin and also was his spiritual guru. After the death of Śrī Kṛṣṇa, eight of his wives became female ascetics with the guidance of 22nd Tīrthaṅkara Neminātha.

International School for Jain Studies (ISJS) in association with Bhandarkar Oriental Research Institute (BORI) organised a two-day International Seminar on “Traces of Śramaṇa Tradition (With Special reference to Jainism): Prior to 650 BCE” on 5-6th October 2019 and the present book “Jainism Before 650 BCE” is the scholarly proceeding of this international seminar. This proceeding is brought out by Shugan Jain and Shrinetra Pandey with their unbiased approach to produce this book in front of the august readers.

The book begins with a comprehensive introduction by Dr. Shugan C. Jain in which he stated the objective of the seminar which was to explore the evidence of Jain tradition through archaeological, cultural, social and literature view as well as to establish the traces of Jainism before 650 BCE as far as possible.

The book contains 13 research papers which were presented in this seminar to explore the depth of the subject with rational approach:

1. Antiquity and Co-existence of Śramaṇa and Vedic tradition by MNP Tiwari

This paper discusses that the Vedic and Śramaṇa traditions were co-existent in the period of Veda, even earlier to that, during the Indus Valley Civilization (2500 BCE). It reinforces that up to 1000 BCE the Indian tradition had both the streams of Vedic and Śramaṇic tradition.

2. Tracing the Existence of 22nd and 23rd Tīrthaṅkara by Shugan Jain
This paper asserts that Śramaṇa culture existed around 8000 BCE during the time of first tīrthaṅkara Ṛṣabhadeva as mentioned in Jain literature as well as from Vedic perspective. It also gives some traces to prove that the 22nd and 23rd tīrthaṅkaras Neminātha and Pārśvanātha are historical persons before 650 BCE.

4. The Inheritance and Evolution of Tīrthaṅkara Tradition in China by Shi Guagquam and Dong Yinije
This paper discusses the term Śramaṇa, as is specially referred in China, to a person who practices Buddhism. It mainly discusses the inheritance of the Śramaṇa tradition by analysing the cultural, economic, and social causes for its rise of in Buddhism.

5. Vrātya: A Representative of Śramaṇa Tradition by G U Thite
Vrātya were ancient monks representing the Śramaṇa tradition. They had their own language, garments etc. and their own identity. This paper focuses on the unique identity and tradition of Vrātyas.

6. Historicity of Tīrthaṅkara Neminātha in context of kinship with Vāsudeva- Kṛṣṇa and Continuity of Tradition: Study in the light of texts and Archaeological findings by Shanti Swaroop Sinha
This paper gives literary and sculptural references to establishing the strong association of Śrī Kṛṣṇa and Tīrthaṅkara Neminātha with their harmonious relationship in Vaiṣṇava and Jain religious traditions.

7. The Archaeological findings in Kaṅkālī Ṭīlā, Mathura, Preceding Pārśvanātha by Reruka Porwal
This paper shows the importance of Mathura as a Jain site since ages. The site of Kaṅkālī Ṭīlā is the most ancient structure available after Mohenjo-daro. Images of Tīrthaṅkara Ariṣṭanemi flanked with Balarāma and Śrī Kṛṣṇa, and of Ṛṣabhadeva were obtained from this site.

8. Development of Jainism and Buddhism along the Silk Road: An Analysis by Volmar Ensslin
This paper states why and how the ancient Silk Road witnessed the development of both Śramaṇic and Vedic traditions.

9. Role of Palm-leaf Manuscripts in documentation of Jainism in Ancient Sri Lanka by Kanchana Dehigama
This paper provides the Buddhist references for tracing the presence of Jainism in Sri Lanka and observes that it is very difficult to identify the Jain and Buddhist remains because of their identical nature.

11. Antiquity and Historicity of Jainism with special reference to Śramaṇa Tradition by Umesh Kumar Singh
Traces of Jainism in the Indus-valley civilization are explored in this paper by citing the absence of weapons or any warfare instruments because the influence of Jainism and its values existed before this period.

12. The Notion of Contemporaneity of Mahāvīra and Buddha and the Chronological epoch of the Mahāvīra in 6th Century BCE: A Revisit in 2019 by Megh Kalyanasundaram
This paper claims that it is required to revisit the references to fixate the time period of Mahāvīra’s existence based on Buddhist literature.

13. Crisis of Separate Identity in Early Ideology: Jainism vis-à-vis Buddhism by Amruta Natu
This paper has the glimpse of journey on how western scholars considered Jainism and Buddhism as offshoots of each other and agreed upon them being two parallel traditions existing today with their own separate identities.

Two appendices follow these research articles exploring highlights of the seminar, and the organising institutions. It also contains a list of contributors, consolidated bibliography and a detailed index perpetuating the significance of the book.

Authors of the research papers have tried to establish historicity of Jainism prior to 650 BCE through their own arguments based on historical and literary facts. It is supplemented by coloured photos with detailed descriptions providing concrete information comprehending the subject matter with time. Anyone who is interested in knowing the traces of Jainism prior to our thinking and established ideas, this book would be a wonderful recommendation.

He is an Assistant Curator at Amar Prerana Trust, Firodia Institute of Philosophy, Culture and History, Pune (MH).