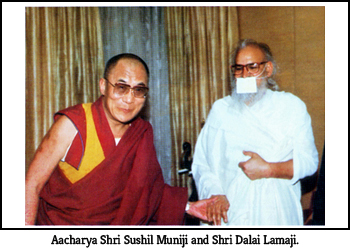 Life and Works of His Holiness Acharya Sushil Kumarji Maharaj for the cause of non-violence, world peace, universal brotherhood and environmental protection

October, 2021 by https://www.acharyasushilmuni.org/
His Holiness Acharya Sushil Kumarji Maharaj was a self-realized master who devoted more than 50 years to promoting non-violence, peace and knowledge of the self.

Guruji (as he is lovingly called by his devotees) was born on June 15, 1926 in Shikopur, a small foothill village in Haryana, India. The village was later named Sushilgarh in Guruji’s honor. As a seven-year-old he left home to live with Shri Chotelalji Maharaj, who later became his religious Guru.

When Guruji was still a young boy, Shri Roop Chandji Maharaj appeared to him in spirit and told him to become a Jain monk (Maharaj was a great yogi and enlightened master in the family of monks to which Guruji belonged. He left his body a century ago. Shri Roop Chandji Maharaj is Guruji’s spiritual guru) In this life, Guruji was not taught yogic systems from any master. His knowledge was realized through direct experience and his powers were awakened through the grace of past lives. When he was 15 years old, he became a Jain muni (monk) in the Swetambar Sthanakvasi sect.

During his academic career in India, he passed through a number of examinations such as Shastri, Acharya, Sahitya-Ratna, etc., and mastered the classical studies of Indian religious and yogic philosophies.

Guruji was a master of meditation and the science of sound. His teaching system is called Arhum Yoga. It is an ancient system for the mastery of the inner self through watchfulness and direct perception. Arhum Yoga encompasses all aspects of philosophy and yogic practice in the Arihant spiritual tradition.

Although Guruji was ordained as a monk in the Sthanakvasi Jain tradition, he regarded himself to be non-sectarian. In 1979 he founded a social order, International Arhat Jain Sangh for the non-sectarian world-wide propagation of Lord Mahavir’s message of Ahimsa and Anekatavada. On 21st April, 1989 Guruji was anointed the Acharya of this Sangh.

Guruji was born into a Brahmin household. As a Jain monk, he travelled on foot thousands of miles across the length and breadth of India. He represented the Sthanakvasi Jain tradition in the making of Saman Suttam, a compilation of Jain principles that was acceptable to all sects of Jainism. He discovered and mastered the secrets of sounds behind Namokar Mantra, an auspicious rendering that is central to Jains and wrote a book on the subject, Song of the Soul.

For hundreds of years and as long as historical records are available, Jain monks did not use any mechanical means for travel. However, on 17th June, 1975 Guruji travelled outside India by aircraft. He told that he was prodded in meditation to do so by the 12 C Acharya Dadaguru Manidhari Jinchandra Suriji Maharaj. Dadaguru asked him to travel to faraway lands to spread Bhagwan Mahavir’s message of ahimsa and anekantavada. This act allowed other Jain monks and nuns to begin using mechanical means of travel, including outside India. The decision caused some controversy in the Jain community. Guruji has travelled and taught extensively, spreading the message of non-violence and self-awareness. He has founded many ashrams and centers in the East and West.

It wasn’t long before Guruji’s divine mission unfolded and he began to gain recognition as a fountain of wisdom, truth and understanding who actively promoted peace and harmony throughout India and his role as peacemaker to conflicting religious group was well recognized. Guruji was a strong willed, passionate and articulate person who never gave up a cause for anything. He worked unceasingly to establish a sense of universal brotherhood amongst the conflicting religious factions of India. He successfully motivated the Sikh leader Master Tara Singh to participate in an open and peaceful dialogue with the government. When H.H. Pope John Paul’s visit to India was strongly opposed, it was none other than Guruji who admirably reminded his fellow countrymen that India has a long standing tradition of welcoming any visitor regardless of his denomination of belief, with open arms. This warmth was realized and given appropriately making Pope’s visit to India a glorious success. In 1986 the Akali Leader Sant Longowal and the Prime Minister Rajiv Gandhi attempted to solve the distressing problem plaguing Punjab — an accomplishment largely attributed to Guruji who convinced terrorist groups of Punjab to honor their compromise with the government. He similarly persuaded Muslim leaders to sit in negotiation with Hindu leaders until a consensus was reached in the Ram Janambhoomi-Babri Masjid issue in 1990 to 1991.

Guruji’s vision was always focused upon a United Earth and in 1957 he convened a World Religions Conference with more than 1200 representatives from 27 countries and 500,000 people in attendance. Guruji’s work in India was not limited to creating religious harmony; he was also acclaimed for his pioneering work in the fields of animal and environmental protection. He initiated the Cow Protection Movement and successfully organized a massive Rally in 1966.

From 1954 to 1994, Guruji had organized and presided over a significant number of World Religions Conferences, which were attended by highly esteemed individuals, including various Presidents and Prime Ministers of India. Pandit Jawahar Lal Nehru, Dr. Rajendra Prasad, Dr. Radhakrishnan, Dr. Zakir Hussain, Fakkruddin Ali Ahmed, Zail Singh and Indira Gandhi were amongst those who participated and Declarations advocating world peace, universal brotherhood and above all non-violence were frequently adopted at these conferences. Guruji also organized several International Jain Conferences which too adopted resolutions of non-violence, peaceful co-existence and reverence to all life forms.

In 1982 Guruji inspired the leaders of eight nations to submit a memorandum demanding peace through non-violence to the Secretary General of the United Nations. He explained that peace through non-violence could not be compromised or exploited and would ensure the sanctity of human life as well as extending protection to the animal kingdom, the environment and all of our Mother Earth. Guruji and his devotees also served as the fourth largest support group for the Peace Rally held in New York in 1982 — an event that was attended by nearly one million individuals from around the world.

In August 1989, Guruji was invited to inaugurate and preside over the World Hindu Conference in Britain since the Hindus regarded him as one of their Spiritual leaders, they enthusiastically embraced his notion of Ahimsa (non-violence) and vowed to join him in propagating the virtues of meditation, vegetarianism and unity. That same year, Guruji addressed the World Conference of Religions for Peace in Melbourne, Australia. Advocating the dire need to protect the animal kingdom and our natural environment, he explained that all living beings equally share the right to life. In 1988, Guruji was a distinguished speaker at Vishwa Hindu Sangh Conference held in Nepal, where once again he overwhelmed the crowds with his moving speeches. In 1990, Guruji was an honoured guest at the Global Conference for Human Survival in Moscow. More than 1200 individuals from 70 countries travelled to the USSR to take part in this historic gathering and were present to participate in Guruji’s meditation and to listen to his views on the need for non-violence. It was here that Guruji had an opportunity to meet with Mikhail Gorbachev and discuss various issues related to the establishment of the world peace and global co-operation. In 1991 he travelled to Iran in an attempt to persuade Saddam Hussein to adopt a peaceful resolution to the Gulf Crisis. Although poor roads and the prevailing war conditions prevented him from entering Iraq, Guruji was widely recognized and appreciated for his valiant efforts to the stop the Gulf War. At the World Parliament of Religions Conference at Chicago in 1993, Guruji’s key note address was applauded for his emphasis on creating a charter of Animal Rights too for creating an ecological balance which was the key to human survival. In the same year speaking at the Global Vision 2000, a Hindu Conference at Washington DC, Guruji held all spell bound by declaring that Hindu was not a religion but a Culture and it encompasses Vedic religion, Jain religion, Buddhist religion and Sikh religion. And Hindu Culture has a history of tolerance and non-aggression, which is the answer to many of the problems in the world today.

His mission continues to work towards the fulfilment of his divine purpose. His Holiness Acharya Sushil Kumarji Maharaj has been a pioneer in preaching AHIMSA unconditionally. Siddhachalam, the first Jain Tirth outside India and 120 acres spiritual retreat, was established in 1983 by Guruji. Pilgrims from around the world continue to be drawn to this magnificence of peace and spiritual solace. International Mahavir Jain Mission became affiliated with the United Nations. Furthermore, the concept of Ahimsa was adopted by the United Nations for the first time in history at the Sacred Earth Gathering in 1992 in order to protect all forms of the 8.4 million species of life existing in the world today. The World Movement of Non-Violence for Peace and Environment was launched in Rio with Guruji serving as Founder-President and Dr. Robert Muller its Co-President. A Jain Studies Department was initiated at Columbia University, one of the oldest and most prestigious academic institutions in the world, and A Jain “Chair” has been established at the Toronto University in Canada. A Jain Encyclopedia has been incorporated into the Hindu Encyclopedia and released by Macmillan Press. Guruji was also invited to participate in the Global Forum in Kyoto, Japan, where the International Green Cross was first launched in February of 1993 with the support of more than 700 delegates from 88 countries. It was here that Guruji met with Mikhail Gorbachev once again and was very encouraged by the former Soviet leader’s warm response towards the visionary Ahimsa University (which became affiliated with the United Nations Peace University in Costa Rica in 1993 as well) and the World Movement of Non-Violence for Peace and Environment.

To add to the growing list of spiritual organizations that Guruji has founded are the World Fellowship of Religions (1957) and the Vishwa Ahimsa Sangh (1957). The 25th Centenary Nirvana Celebrations of the 24th Tirthankara of Jainism, Lord Mahavir, was also convened by Guruji during this time and is a celebration that continues annually in the Jain tradition the world over. He also founded the International Mahavir Jain Mission (1977), the World Jain Congress (1981) and the World Center of Non-Violence. He was the Honorary President of the World Conference of Religions for Peace, the director of the Temple of Understanding, a Founding Member of the Global Forum of Spiritual and Parliamentary Leaders on Human Survival, President of the Punjab Peace Unity Committee, President of the Ram Janambhoomi-Babri Masjid Solution Committee and a Founding Member of the Vishwa Hindu Parishad.

His Holiness Acharya Sushil Kumarji Maharaj gave more than five decades of selfless service through non-violence, peace and universal brotherhood. He had devoted himself entirely to the ideologies of the upliftment of all beings.

He strived for an eco-friendly environment, keeping in mind the protection and safety of all creatures that belong to this Earth. Guruji heard the cries of people as well as nature and he understood their anguish. He was definitely a crusader with commendable qualities, courage and ideologies. Wherever Guruji journeyed around the world, he was sought after for his insightful intelligence, his loving and childlike soul and above all, his wisdom. He possessed an extremely high level of self-realization. His words matched his actions whereby his enduring motivations miraculously moved people.

Guruji was a great moral leader and teacher who could inspire tolerance, peace and love. Our respected, loved and dearly missed Gurudev His Holiness Acharya Sushil Kumarji Maharaj attained SAMADHI (left his worldly body) on the 22nd April,1994 in New Delhi. He wanted our memory of him and his teachings to be an inspiration for our own journeys. “We must learn to live without attachment”, was his greatest teaching. At present, Guruji is spiritually guiding his mission to follow the path sketched out by him with the sovereign aim of uniting the world in a State of AHIMSA.