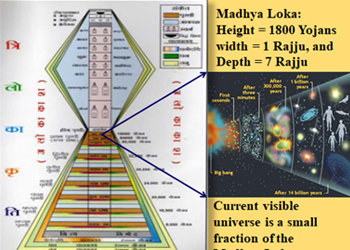 April, 2022 by Prof. (Dr.) Rajmal Jain
In Jain philosophy the cosmos (Lokakash) is considered to be eternal, perennial, indestructible, imperishable, ever-present and persistent. The basic philosophy says it is neither created nor governed by any God or Supreme Power. Further, it is regulated by its own laws of nature viz. time, fundamental realities, karma, self-exertion, and determinism. In Jainism space (Loka) is consisted of two fundamental realities: living and non-living. All things in the universe are a result of their interaction and union.

On the other hand, according to science, the universe was created with a big bang around ~13.8 billion years ago and is likely to end in a big crunch or big chill. However, the time of its end has not been estimated by the scientists. Further, owing to the momentum of bang, it is expanding into the infinite space. Currently science believes that universe is full of radiation, particles, and energy but without any soul or life. Science believes that the life is created through bio-physical-chemical process of matter in the universe. The Big-bang theory also suggests that a period of darkness existed until about few hundred million years later, known as Dark Age, when the first objects flooded the universe with the first light, which believed to be captured by NASA’s Spitzer Space Telescope. However, the astronomers do not know if the very first objects were either stars or quasars These stars first grouped together into mini galaxies. By about a few billion years after the big bang, the mini galaxies had merged to form the mature galaxies, including spiral galaxies like our own galaxy – the Milky Way. The first quasars ultimately became the centers of powerful galaxies that are more common in the distant universe. Hubble Space Telescope has captured stunning pictures of earlier galaxies, as far back as ten billion light-years away.

In contrast to infinite size of the universe according to science, the Jain model of the universe refers shape of the Akash like a man standing with keeping both the hands on his waist and the legs apart (Puruṣākṛti). The resultant structure is called Loka and it is finite in structure. Outside the universe (Loka) is Trance-Universe (Aloka), a pure and infinite space. The Jain Loka is divided into three parts: upper, middle, and lower Loka. The boundaries between Loka and Alka are fixed by two forces or quantum fields viz. Dharmastikaya and Adharmastikaya.

In contrast to Jainism, modern science says that the universe is infinite and even it is expanding from its current volume. Further, there is no trans-universe (Aloka) with empty space. However, there is possibility of multi-universe. The universe contains large number of stars, quasars, solar systems, and galaxies of various shapes such as spiral, cylindrical, elliptical, irregular etc.

However, the shape of the universe depends on its density. If the density is more than the critical density, the universe is closed and curves like a sphere; if less, it will curve like a saddle. But if the actual density of the universe is equal to the critical density, as scientists think it is, then it will extend forever like a flat piece of paper. However, Jainism also describes the curvatures in the Loka. We find flat, closed, and open structure in Jain cosmological model. Our Agams cite that the universe is not same everywhere, it is expanded at some places while contracted at other places. The regions, where the universe expands, or contracts are recognized as curvatures and technically known as Vigraha in Jainism. Comparing the density model, we may infer that the Urdhva Loka is similar to closed universe, the Madhya Loka like the flat universe and the Adho Loka as the open universe. Because of varying density, we observe the curvatures. These curvatures are inbuilt and everlasting due to continuous action of the two elements or quantum fields/ forces i.e., Dharmāstikāya and Adharmāstikāya, causing uneven structures in response to local modifications.

Jainism describes building blocks of the universe quantitatively and in greater details. The Loka consists of six everlasting and imperishable substances such as: Jivastikaya (soul), Pudgalastikaya (matter), Dharmastikaya (force for motion), Adharmastikaya (force for rest), akashstikaya (space/ loka) and kal (time). These substances, through their modifications and the relation in which they stand towards one another, produce the multifarious world-processes. In fact, the jiva has continuous interaction with pudgal as a function of space and time throughout the universe, and that governed by two quantum fields/ forces dharmastikaya and adharmastikaya. However, all these six elements exist only in the Loka and not in the Aloka. Jain canonical texts cite that the boundaries between Loka and Aloka as well as the three layers are monitored by the aforesaid two forces.

In order to understand the Jain cosmos in the perspective of modern science the Madhya Loka is most important and interesting. Madhya Loka consists of 900 yojans above and 900 yojans below the reference land surface. It is inhabited by

1). Jyotishka Devas i.e., celestial objects (planets, stars, galaxies etc.) at a height between – 790 to 900 yojans above the reference land surface.

The Madhya loka is densely populated by continents and oceans. However, these continents and oceans mean that each continent itself might be either a universe, separated from the other by an ocean/ gaseous media or it might be a large galaxy system and separated from the others by a large volumetric area of water or other gaseous molecules. In this context, the most common question that frequently being asked “where the Mount Meru is located”? The Jain texts cite that the Mount Meru is at the center of the world surrounded by Jambūdvīpa in the form of a circle forming a diameter of 100,000 yojans. Texts also cite that there are two sets of sun, moon and stars revolving around Mount Meru: while one set works, the other set rests behind the Mount Meru. This philosophy is difficult to explain in reference to modern science. However, significance of this concept might be that the Sun, Moon, planets, and stars etc. are reference points in each plane of the celestial sphere of a given galaxy in the Jambūdvīpa, which itself may be one independent universe including our own Milky-way galaxy, likely to be “Bharat Kshetra”. Thus, the Jambūdvīpa appears to be a set of galaxies and the center of the same would be Mount Meru, and, perhaps, Jambu plus other two continents (Dhatki and half Pushkar) may be a small part of the visible universe of modern cosmology. This argument may be further endorsed in context to the total number of galaxies possible in the whole Madhya Loka would be >1012, which is first order estimate by modern cosmology (https://nineplanets.org/questions/). This also suggests that the observed red shift in the universe, suggesting that the galaxies moving away from each other, is in fact, within the middle loka. Further, the remaining continents and oceans are likely to be other universes within the middle loka in consistence to theory of multi-universe/ parallel universe of modern astronomers.

In view of above scenario, it is but natural to ask, “where is our home in the middle loka?” In order to address this question, we have to learn more about Jambūdvīpa. Jain texts describe that the Jambūdvīpa continent has 6 mighty mountains, dividing the continent into 7 zones (Kshetra) viz.

In view of the preceding discussions, Jambūdvīpa appears to be a set of ~108 galaxies, we may conjecture that these seven kshetras (zones) appear to be sub-set of galaxies and our Milky way is a part of the Bharat Kshetra. This may also be endorsed in context to Jain texts which cite that the three zones i.e., Bharat Kshetra, Mahavideh Kshetra and Airavat Kshetra are also known as Karma Bhoomi because practice of austerities and liberation is possible and the Tirthankaras preach the Jain doctrine, and the other four zones, Ramyak, Hairanyvat Kshetra, Haimava Kshetra and Hari Kshetra are known as Akarmabhoomi or Bhogbhumi as humans live a sinless life of pleasure and no religion or liberation is possible. The Mount Meru is in the center of Jambūdvīpa i.e., in the center of the Mahavideh Kshetra, which is belt of galaxies in equatorial plane of the Jambūdvīpa. It is further widely established that Shri Simandhar Swamy is currently renouncing and meditating in the Mahavideh Kshetra in accordance with its time cycle (Kal Chakra) to become next Tirthankar of that Kshetra. Similarly, the Bharat Kshetra and Airawat Kshetra are also a subset of galaxies in the southern and northern hemisphere of the Jambūdvīpa respectively. These two in addition to Mahavideh Kshetra are Kaumbhoomi and therefore Jainism is being worshipped and Tirthankars take birth, however, as per their respective time cycle. Our home is in a land known as the Earth, a suitable planet of the solar system of one of the galaxies of the Bharat Kshetra known as Milky-way (Akash-ganga), where the time cycle is spanning in the Fifth Ara.

We discussed the universe/Loka in the perspectives of Jainism and the modern science. According to Jain texts the universe is comprised of Loka (cosmos) and Aloka (trans-cosmos), and the Loka is of finite size, while Aloka is empty and of infinite size. On the contrary, according to the science the universe is infinite, full of matter, energy, and radiation. The Loka of Jain texts is comprised of six eternal elements. However, the important conclusion of our investigation in the current article is the universe of science is restricted in the middle part of the Loka and even that also has not been explored by all big telescopes or space missions. The multi-universe theory is also likely to be possible in the middle Loka as it has several continents and oceans with each one is comprised of billions of galaxies. However, according to Jain canonical texts, the habitable zone planets are possible only in two and half continents as discussed in the article. Each continent has different time cycle and accordingly the temporal sequence of events of Jain tradition take place including the birth of Tirthankaras.

Prof. (Dr.) Rajmal Jain is an internationally acclaimed space scientist worked at Physical Research Laboratory, Dept. of Space. He is one of the founders of Udaipur Solar Observatory in Udaipur. Currently he is an Outstanding Professor at IPS Academy, Indore. He guided 6 Ph.D. students and many project fellows. He is Principal Investigator of the Soar X-ray Spectrometer (SOXS) mission, the first space borne solar astronomy experiment of Indian. He discovered iron and nickel in the Solar Corona and in its recognition, he is honored with Fellowship of Royal Astronomical Society (FRAS). Dr. Jain participated in the instrumentation development for Chandrayaan-2, Mars, and Aditya missions. He received “Lifetime Achievement Award” from Govt. of Madhya Pradesh. He is the first Asian to receive International Young Astronomer Award. Dr. Jain visited more than 100 countries and represented India at various platforms. He discovered the Chandraprabhu Temple in the Tigray region of Ethiopia and signatures of Nigantha tradition in South America. He received many National and International awards, honors and citations including “Saraswati Putra” and “Jain Ratna” by Acharyashree Kanaknandi ji and Muni Tarunsagar ji Gurudev respectively.

Jay jinendra pranaam namaskar.
Very nicely presented by Hon.Respected Sir Prof. Dr. Rajmalji Jain.
The whole article has been prepared with balanced views of Jain cosmology and that of the modern scientists.
This is possible because the respected author is well learned Jain, well acquainted with leading Jain monks who are having good knowledge of Jain cosmology and the modern science and he himself is in the international field of Astronomical observatory .
He has very well explained that this article is an approach to view the Madhyaloka and the scientific study of the universe from current scientific study.

As it is very clear, and pointed out by respected author that the modern science talks about Madhyaloka.
Jain comology extends beyond the limits of this Madhyaloka and spreads to Urdhvaloka and Adholoka.
Hope that someday science may make progress in the matter which has been narrated by Jain Tirthanksrs – Omniscient.