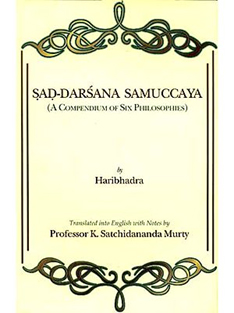 There are very few Sanskrit works which deal with all the systems of Indian Philosophy. This is not surprising if we remember that even in the West Hegel was the first to emphasize the importance of the study of the history of philosophy and lecture on it. In India as well as West the great philosophers developed their own positions with reference to and though the criticism of other philosophies; but “history of philosophy” seems to have emerged as a clear-cut discipline only with Hegel. In recent times several books dealing with Indian philosophy have been published; and none of them neglect chronology. Though no ancient Indian works of this sort are to be found, books which give an account of diverse philosophies were not lacking. None of them cares for chronology or for the development of the systems. Some of them have been lost; but three of them are available. They are Haribhadra’s Saddarsana Samuccaya, Sankara’s Sarva Siddhantasara Sangraha and Madhva’s Sarva Darsana Sangraha.

Competent scholars have doubted whether the author of Sarvasiddhantasara Sangraha could be the great Sankara himself. This book deals with what are usually called the six Hindu systems of philosophy and some other schools, in addition to non-Hindu systems, such as that of Buddha.

Madhava’s book has been translated into English and it is the only one among the compendiums of philosophy which is popular. It treats of a number of philosophies besides the six Hindu systems. Madhava belonged to the fourteenth century, A.D.

Haribhadra, according to tradition was the Brahmin priest of a king called Jitari, ruler of Chittaud near Chitrakuja. He later became a convert to Jainism and wrote 1400 works on Jain philosophy, religion, and history, and is regarded as a great authority by the followers of that religion. He is said to have lived towards the end of the fifth century and the early decades of the sixth century of the Vikrama era. According to Barth, he lived in the ninth century (Indian Antiquary, XXIV, 1895.)

One of the works of Haribhadra is the present one, Saddarsana Samuccaya, “A compendium of Six Philisophies”. Written in 87 short stanzas, it is a model of brevity and clarity, and contains brief accounts of six philosophies: Bauddha, Nayaya Samkhya, Jaina, Vaisesika, Mimamasa. Some who identified Vaisesika with Nyaya counted Carvaka as the sixth philosophy. Haribhadra mentions this fact and gives an account of Carvaka also.

It has now become the custom to designate the following philosophies as the six Hindu philosophies.

“Philosophies are six, viz., systems of Kanada, Aksapada (Gotama), Vyasa, Kapila, Patanjali and Jaimini”. These are respectively called, Vaisesika, Nyaya, Vedanta, Samkhya, Yoga and Mimamsa. Nobody knows who first originated the tradition of grouping these six as the six Hindu philosophies, Sat Darsana. The first book which enumerates them thus seems to be the Visvasaratantra, believed to be written in the twelfth century, A.D. Madhava’s famous book describes many other Hindu systems of  philosophy besides these six. Jayanta, a great writer on Nyaya and who belonged to a family of Minamsakas, mentions the following as what he calls the six logics or theories, Sat Tarki; Mimamasa, Nyaya, Samkhya, Jaina, Bauddha and Carvaka. Jayanta is reported to have lived in the tenth century, and it is curious that Yoga and Vendanta do not find a place in his list as well as that of Haribhadra, which proves that the omission of them by Haribhadra was not due to any prejudice.

This also means that even by the tenth century it has not become the fashion to refer to Vaisesika, Nayaya, Samkhya, Yoga, Mimamasa and Vednta only the systems. Jaina and Bauddha philosophies invariably found their places in any such enumeration of six systems. The Justification for the omission of Yoga was perhaps that it was only a spiritual discipline, which to a large extent borrowed its metaphysics from Samkhya while Vedanta was omitted probably because it was considered to be nothing but the application of Mimamsa rules of interpretation to the Upanisads. Thus, it is in a sense theology.

Whatever might be the reason, Yoga and Vedanta find no place in Haribhadra’s Compendium, and this is regrettable as one of them has become the dominant philosophy of India.

I have thought it useful to translate Haribhadra’s Compendium into English, because it is shorter in compass than Madhava’s books, but mentions in brief all the important points in connection with each system. It also avoids descriptions of semi philosophical systems as Rasa-vada and purely religious philosophies such as Nakulisa-pasupata. He gives objective accounts of all the philosophies and attempts no criticism of any of them; except that while describing his own philosophical faith he, begins by saying that it is a “well thought-out one” and ends by concluding that it is entirely free from self-contradiction. I thick students of Indian philosophy in our universities will profit a great deal by reading the works of Madhava and Haribhadra, alongside the standard modern works of Radhakrishnan and Das Gupta.

Manibhadra has written a commentary on this work and both the original and the commentary were published in the Chowkhamba Sanskrit Series of Banaras (1905); and a second edition came out in 1919. Unfortunately, no details seem to be available about Manibhadra except that he too was a Jaina, with a surprising catholicity of mind. I have freely drawn upon this illuminating commentary in the writing of my Notes.

There is another commentary on this book by Gunaratna. Unlike Manibhadra’s, it explains in great detail every system. Along with the text, it has been edited by Luigi Suali of Bologna and published by the Calcutta Asiatic Society in 1905.

Suali has edited the text basing himself upon an old and carefully written manuscript in the Berlin University Library and another belonging to Hermann Jacobi. The Banaras edition is based upon two manuscripts – One from Jaipur and the other belonging to Madan Gopal Library of Brindavan.

Manibhadra’s text differs at some places from Gunaratna’s: but these variations are few and unimportant. Except in a few cases, I have usually followed Manibhara’s readings.

Professor Ram Murti Sharma, Ph. D. Litt., Professor of Sanskrit, Panjab University, Chandigarh has helped in editing the text and correcting the proofs, etc. I appreciate his help and am grateful to him. I am glad that my translation of this classic is being republished by Messers Eastern Book Linkers, Delhi-7.

Kotta Satchidananda Murty (1924-2011) was an Indian philosopher and professor. Murty served as the Professor of Philosophy, Andhra University, Visakhapatnam and Vice-Chancellor of Sri Venkateshwara University, Tirupati in the state of Andhra Pradesh, South India. He specialized in Buddhist philosophy and contributed extensively to Mahayana Buddhism. His treatise on the teachings of Nagarjuna is well acclaimed.