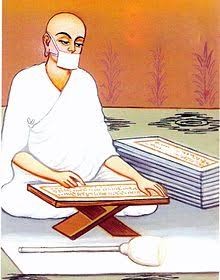 Independence of each soul is the fundamental principle of Jainism. Further, self-help is the way to achieve such independence. This indicates that Jainism is the religion of self-reliance (Shraman Dharma).

The Sanskrit word “Shraman “is derived from the word “Shram”, meaning labour or effort. Thus, Shraman is one who engages in “Shram”. The Shraman tradition is predicated on endeavour. It treasures penance consorted with knowledge. In other words, a Shraman makes a serious effort to improve his/her life meaning, efforts by themselves for spiritual progress.

Many religions, on the contrary, extort that good fortune and ultimate salvation result by accepting certain scripture, a supernatural or superhuman entity and/or by indulging in certain ritualistic practices.

Thus, one’s life depends on the favours granted by some external entity that can be influenced through one’s actions such as prayers, worship and certain rituals performed by the self or by other individuals on one’s behalf. However, a self-reliant person (Shraman) believes that the course of one’s life is governed by the interactions between soul and its animate and inanimate environment.

A soul bears the consequences of the desirable and undesirable karma that it had acquired. The Karma obtained by oneself would be of no consequences if one could enjoy the favours bestowed by others.