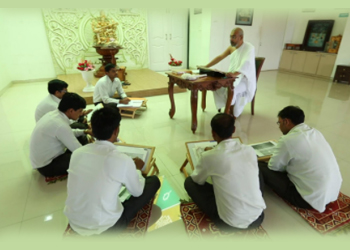 Shrut Bhavan – A Research Institute, In pursuit of Imparting Knowledge

May, 2021 by Dr. Jitendra B. Shah
Imagine our ancestral religious knowledge getting further reduced over a period of time and hence will be unavailable to future generations… The thought itself is very disheartening.

Let us go to the past a bit. 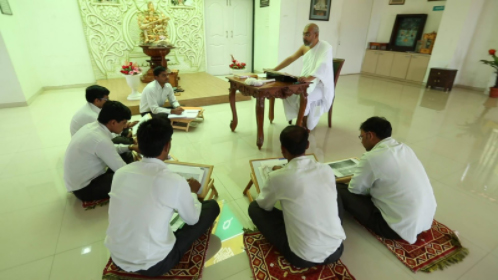 Karunanidhan Bhagwan Mahavir showed the way of welfare to the world. His disciples listened it and remembered it. We call this “Shrut”. Shrut literally means an act of listening. So, this explains that Jain scriptures were passed to generations by oral recitations and were memorised by learned Acharyas. Jain Dharma, one of the world’s oldest religion is presented in Aagams and Shastras. We call these also as Shrut. After Bhagwan Mahavirswamiji’s Nirvan, due to impact of the time, various calamities, attacks, loss of individual powers; the remembrance power (power to remember sutras) started to diminish. Seeing the possibility of extinction of valuable knowledge given by our Bhagwan Mahavir, Shri Devardhigani some 1500 years back then, initiated the writing of scriptures. With the help of 500 other Acharyas, Sadhu Bhagwant and Sadhviji an estimated 1 crore sutras were inscribed on palm leaves over a period of 13 years.  What a great effort must have been put in!!! Hence today we have 45 Aagams from 84 originally recorded. Our knowledge base increased and based on it new shastras were created.

So, if the initial thought bothers us then, though an enormous task, it is our today’s generation responsibility to work towards preserving these precious, prize less scriptures in an utmost good form and making it available to learned Acharayas and scholars. Ahimsa (Non-violence), Anekantwad (many-sidedness), Aparigrah (non-attachment) are some of the roots of Jainism and hence Jain Dharshans thoughts, mediation is very intriguing today also.

In present era, the enormous task has been initiated by Shrut Bhavan. Shrut Bhavan is a research institute started in 2010 which undertakes research, conservation, and many following acts of Aagam, Shastras and ancient manuscripts.  There are many manuscripts which are not even printed, and printed ones had mistakes and errors. In Jain oral remembrance tradition (Mukhpath) mistakes were made due to auditory perceptions, similarly, mistakes also happened due to improper reading/understanding of manuscripts which distorted the meaning in it. To protect from such mistakes, a modification, a amendment was mandatory. Hence Shrut Bhavan has embarked its research project on vast knowledge treasures of Jainism which encompasses.

–More than 30,000 Jain scriptures (granths) are in form of manuscripts and in Sanskrit, Prakrit, and other languages (written in old lipi).

–More than 50,000 copies of it are in the earlier old local language.

The current state of this immense treasure is very disheartening and challenging as most of these scriptures are not published and are perishing in libraries over a period of time and these libraries are also in petty state owing to lack of care and fund. In fact, many valuable scriptures are also sold abroad. Besides this, the scriptures that are published need to be authenticated, edited, and corrected based on ancient manuscripts which are in old lipi. It is difficult to find many pandits to read and work on ancient languages at present. Imagine, how difficult it would be in future to read ancient manuscripts.  Our immense Knowledge treasure is perishing day by day.

We are utmost dedicated to protection, enriched purification, and extensive research of ancient intellectual property of Jainism. Shrut Bhavan Research centre, since 2010, is striving hard to pass on this ancient knowledge to coming generations in its purest form.

It is popularly said, we will have to sow the seeds, so that our future generations could reap the sweet fruits.  We received the priceless heritage due to gigantic efforts of our wise and learned acharyas and other scholars. They have created and shared their knowledge without any preconditions.  This will be our humble tribute to our great gurus, to carry forward the messages of Bhagwan Mahavir Swami to the generations to come with our dedicated and long toil efforts.

We are proud to be associated with such far reaching projects that will carry the eternal message of Bhagwan Mahavir swami to centuries to come. The task is vast and challenging. To expedite it, everyone can be a part of this in various ways like providing one’s research and technology knowledge, expertise in Sanskrit knowledge.

More photos and information on  Shrutbhavan can be seen by visiting www.Shrutbhavan.org

Dr. Jitendra B. Shah is a scholar of Indian philosophical systems, in particular Jain philosophy, and is well versed in Sanskrit, Pali, and Prakrit. He has vast experience in manuscriptology. He has authored 12 books, more than 150 research articles, and has delivered lectures in Indological institutes across India.

I m deeply impressed with you n your zeal to preserve us fathomable treasure of Jain literature. My best wishes for continuation and preservation of your of Jaina literature and thereby Jainism, and project,efforts and of course your health and your family.

I am impressed by the work of this institution and hope that all such minded person/organizations shall unit and work together to produce one interpretation of ‘AGAM’. I am an individual and interested and want to be attached with this.